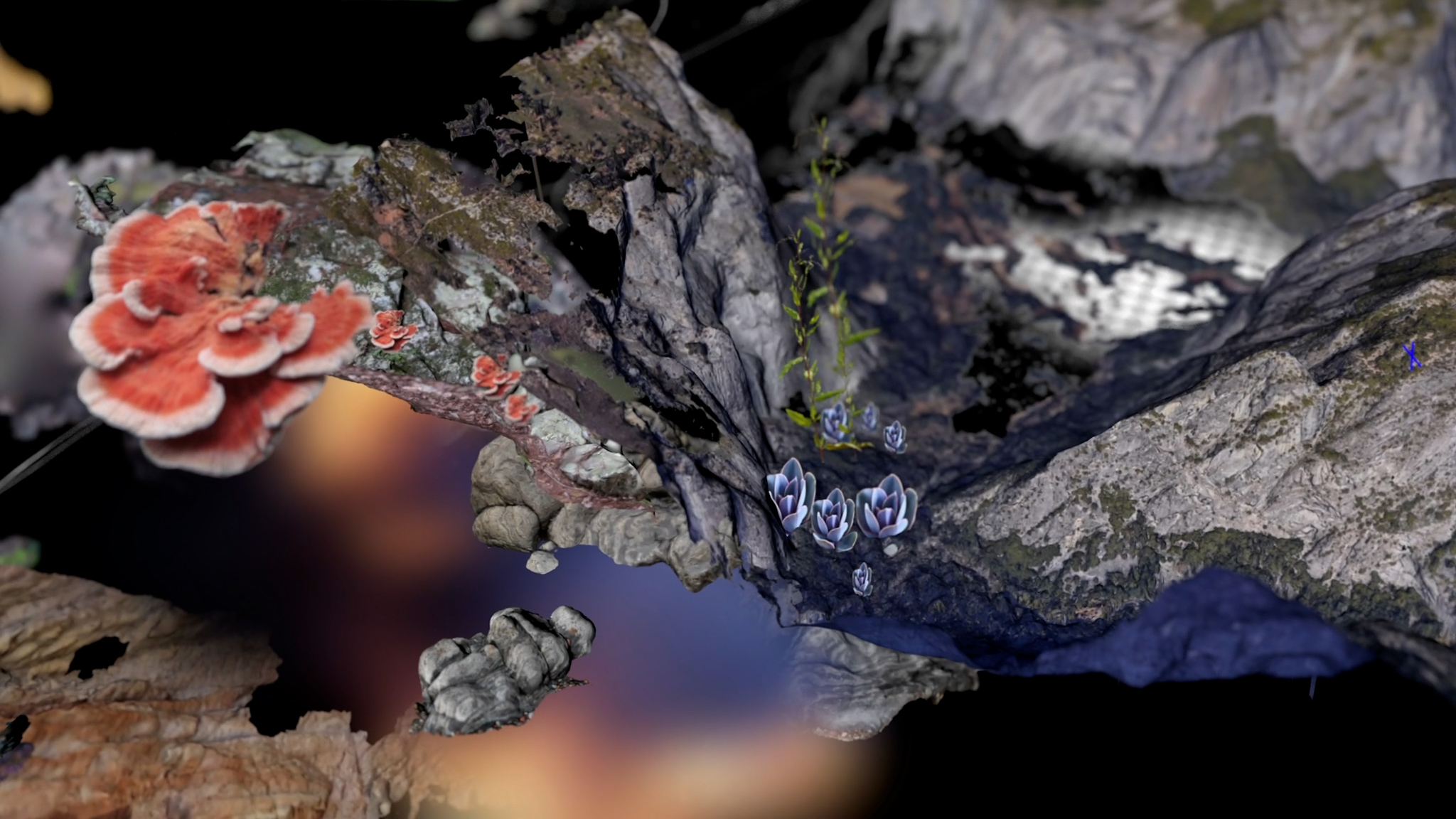 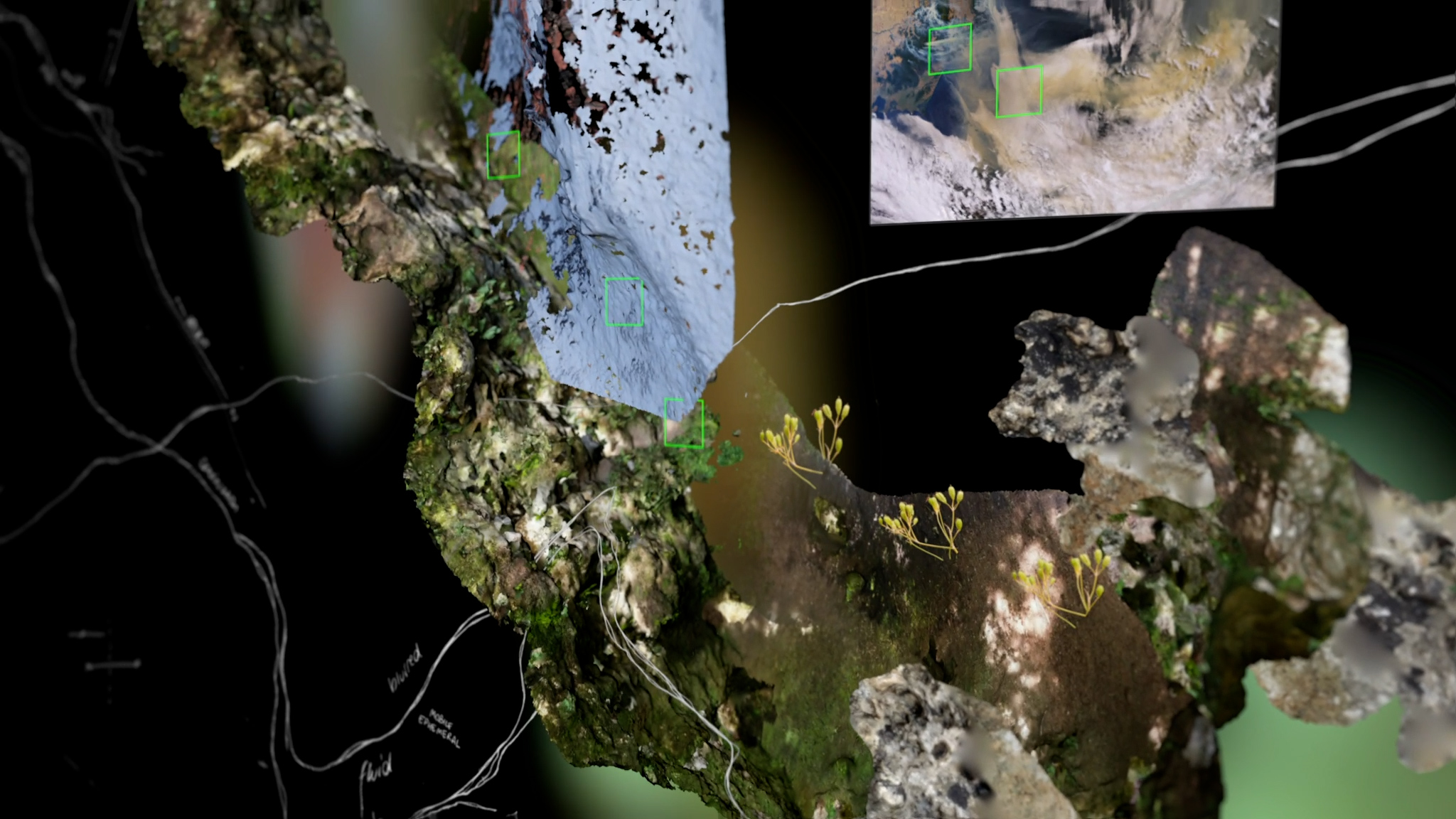 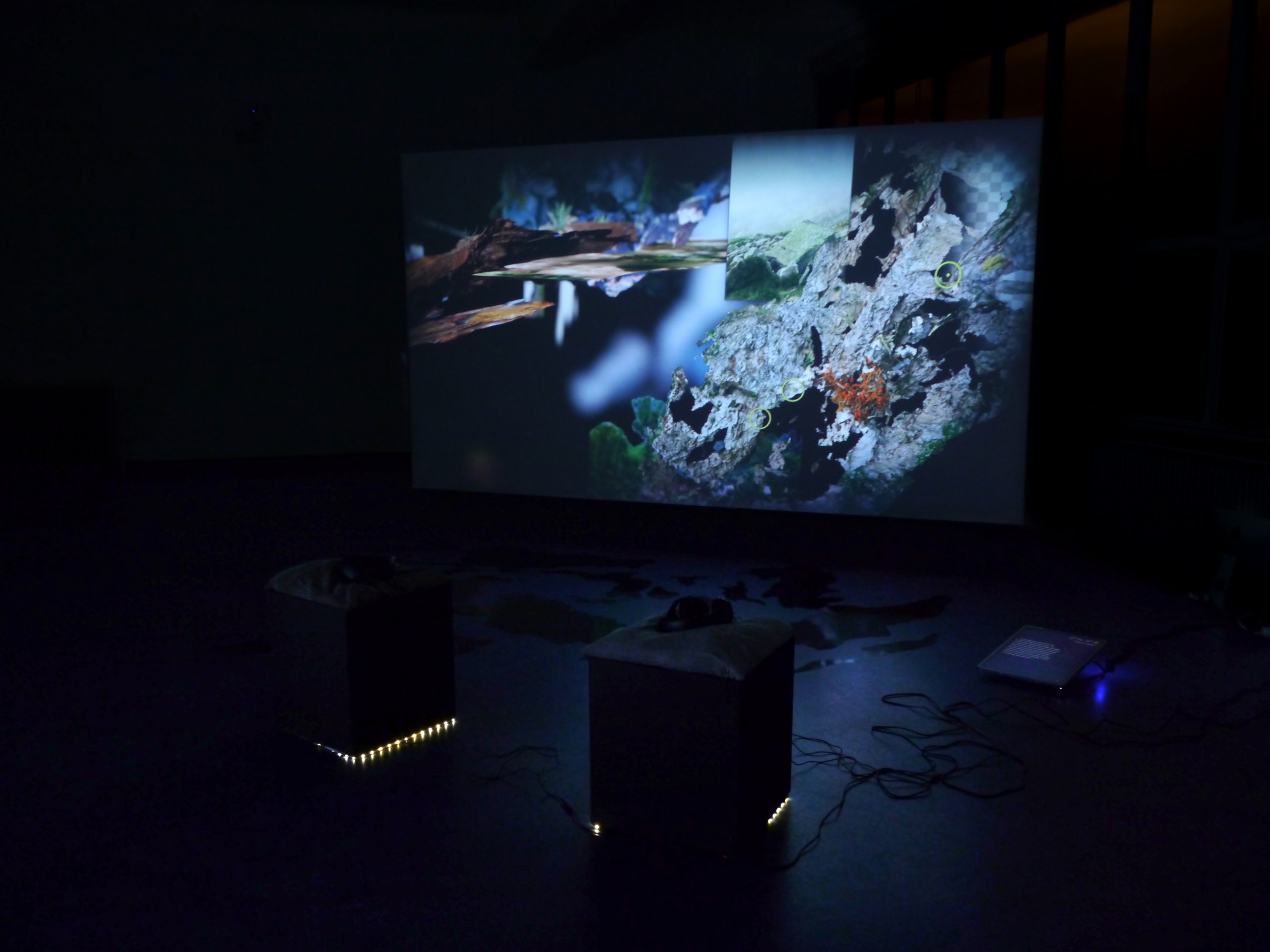 2020. video installation 16:55. digital, mixed media.
0°N 0°E is an invitation into a collective, technologically mediated memory of nature.
0° N, 0° E retraces the origins of the Null Island, a fictional island imagined to float at the intersection of the prime meridian and the equator, at the 0°, 0° coordinates position. The null value is attributed when data is absent, thus all those images, files, registrations that are uploaded online without specified geoposition, are erroneously associated with the location 0,0 by the software. In this way, the Null Island becomes an archive, the place where all those lost objects come together.
The Null Island is thus considered a cyber-myth, as it tries to give shape and context to an internet phenomenon and contributes to our understanding of it. Using the Null Island as a metaphor and using worldbuilding as a methodology, the work is an immersive exploration of the island and its visual and sonic landscape. Focussing on natural landscapes and objects, the project investigates how experience and knowledge is generated when the only way to access nature is through a hypermediated modality.
The island is constructed with original and downloaded photographs, satellites pictures, 3D models and sound recordings from different sources, visually creating a collaborative experience.
0° N, 0° E finds and collects these different media that, although documenting and depicting nature, are truly digital files. Most of these files are sourced from online databases of biologists, geologists, archeologists who document specific locations and objects for survey and conservation. As for them technologies such as satellites photographs, 3D scanning and field recordings are tools for research, part of the process of studying and cataloguing natural environments, for the artist this speaks about the possibility of translating and extending the lifetime of this objects in the digital format. Peculiar rock formations, engraved petroglyphs, endangered coral species and flora; these are all examples of natural artifacts that can encounter physical, material deterioration, especially under the threat of human impact and climate change. In this way, the work carries as well an ecological question: how can natural environments be saved and preserved in a digital format? Can technological mediation encapsulate a sort of knowledge of extend the memory of these environments and objects?
The Null Island becomes a timeless, liminal place where all these objects try to survive virtually, beyond material deterioration.
Furthermore, technological mediation lacks the ability of fully translate a physical experience.
In this way, the work talks as well about our experience of nature when we can only access a mediated manifestation of it. Through all these online media, all these files that are uploaded to the internet by different people, our experience of the offline natural world is shaped and constructed.
The ambient soundscape is designed by Igor Dubreucq, beautifully blending natural, animalistic sounds from field recordings sourced online, mixed with Igor’s produced sounds, adding a more cinematic feeling to it, together with Michelle van Ool’s dreamy strings. Together all these elements evoke an otherwordly atmosphere, suspended between the natural and organic and the electronic, artificially produced. The atmospheric, immersive sound drag the viewer into the exploration of the island.

Deborah Mora’s artistic practice brings into play more-than-human perspectives, exploring notions of memory and preservation, rewilding and resilience, transience and grieving. Moving away from the distinctions between nature, culture and technology, she researches how ephemeral objects and experiences are preserved and how they perpetuate in the digital era. She focuses on nature processes and environments, as well as (human) cultural artefacts, languages and myths. More info on: https://deborahmora.net/about.php