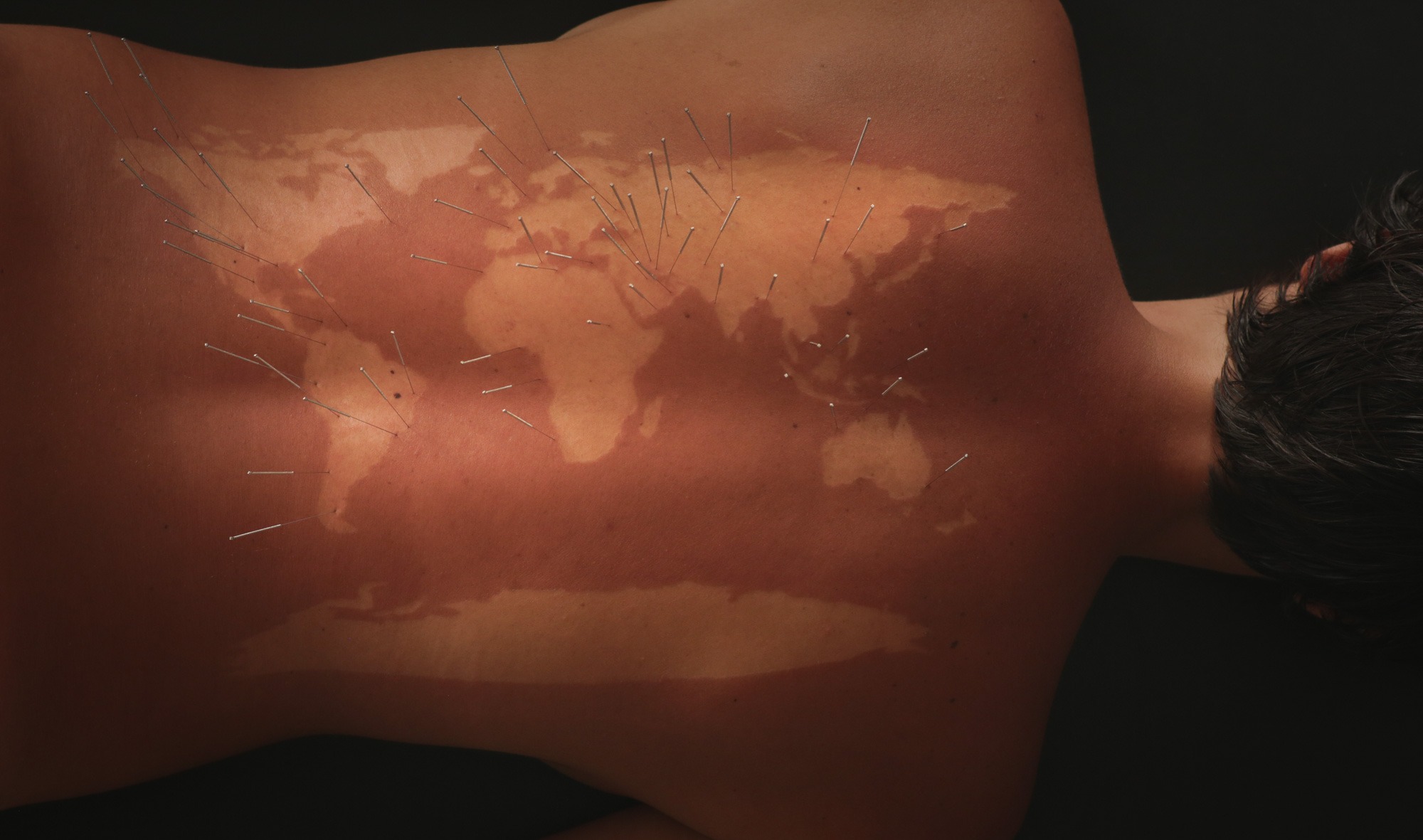 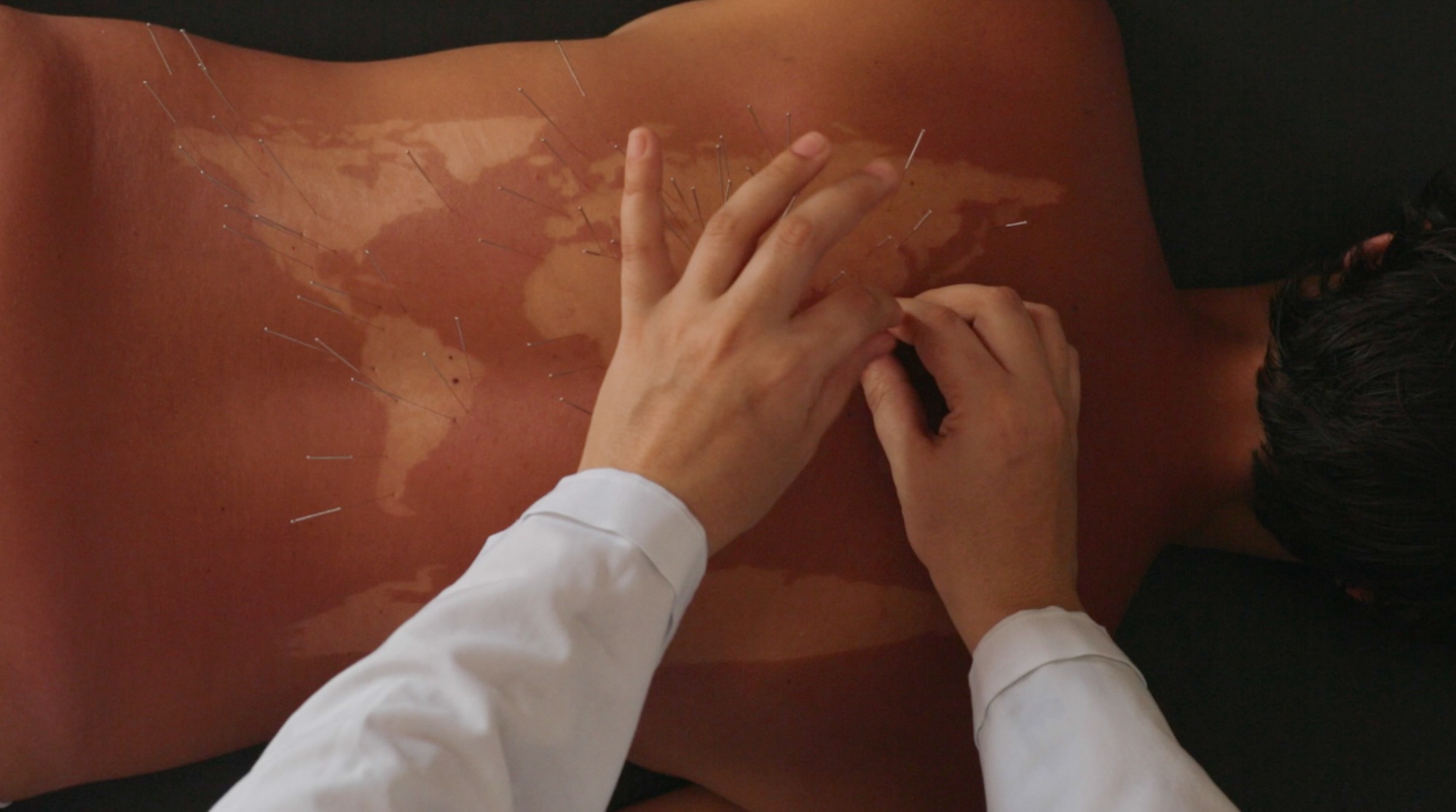 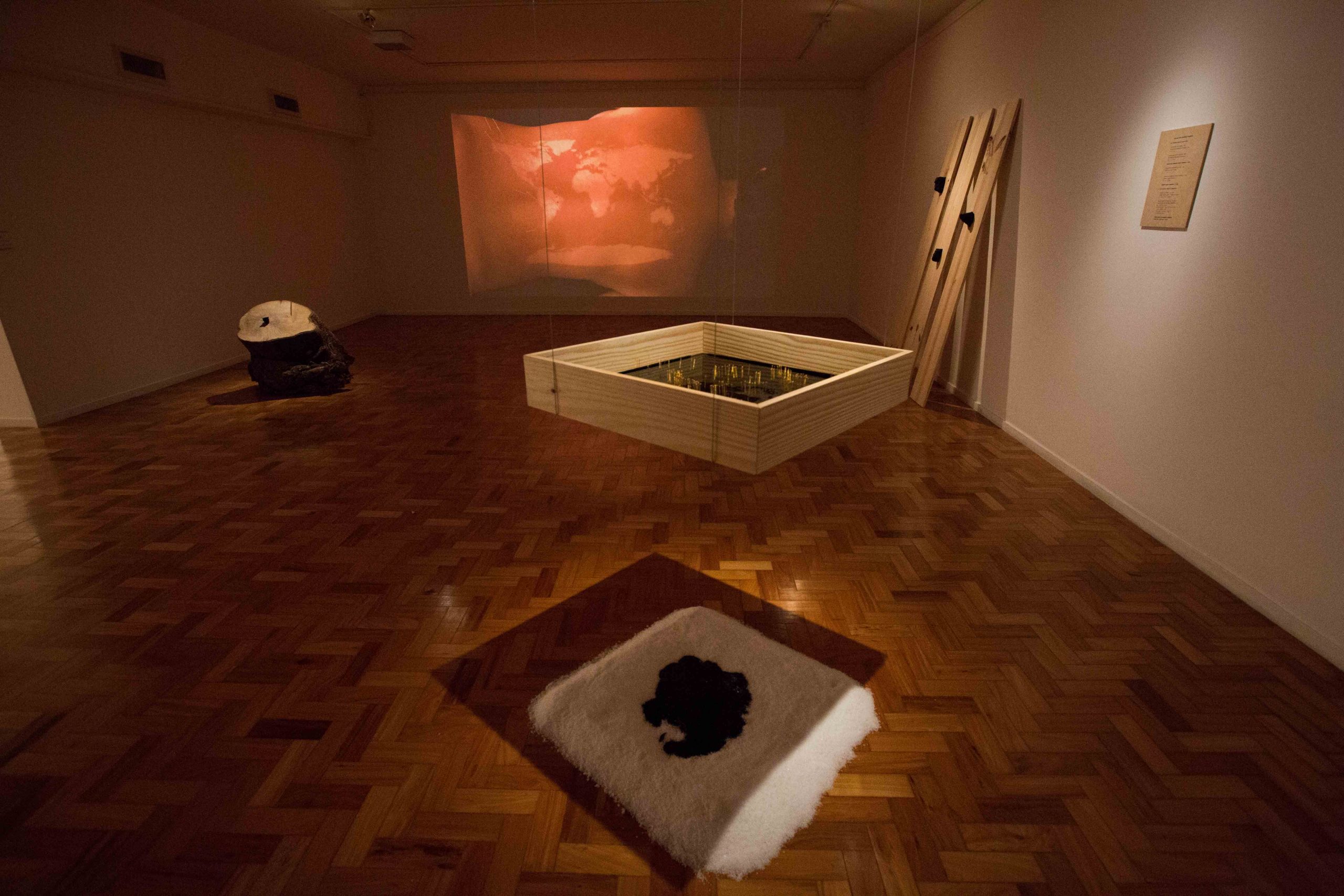 The work “63 Perforations” is a performance oriented to video in which a world map was marked on my body by sunlight. After three days of sun exposure, the drawing of continents and islands emerged on my skin. The drawing pigment was the very skin pigment: The Earth’s geographic reference encrusted in the epidermis, so that body and drawing become one. It is over this first layer – the skin-map – that the actual performance takes place: on a single shot, the video follows an acupuncture session in which the needles are placed in the locations related to major oil reserves around the world.

This work asks about how and with what interests do we access the energy resources of the planet. In the case of the analogy between the perforations in the body and in the Earth, both put the energies to flow, but with different objectives. Carbon-based energy is deeply connected to our history, our modes of social organisation, power relations, and geopolitics. While the acupuncture perforation seeks to balance the body through the release of the retained energy, the oil drilling seeks to exploit the condensed energy of the planet, and end up causing an ecological and climatic imbalance.

“63 Perforations” also especulates about the contrast between human and nature scales. Mapping and measuring are some of the methods used in science to relate the dimensions of the body and the Earth. The body itself is the first human measure for the relationship with the world – the hand, the foot – and it is taking the body as starting point that we can experiment the recognition of the external space. The perception of the dimensions and scales is directly related to how we use our senses.

This artistic research leads to think about politics on the scale of the Cosmos – the politics of the human and the non-human, the climatic and environmental politics, in which the human agent has a major impact – a cosmopolitics. It is tuned with the idea that the Arts could play an important role by creating new imaginaries that help us deal with the crisis of our present time.

“63 Perforations” is part of a broader artistic investigation on fossil fuels, human agencies in nature, mining industry and land use, ecofeminism, and the idea of the Earth as a body, and the body as a territory. The Anthropocene and Climate Change were concerns that moved my artistic process as well as my Phd thesis “From the Fossil to the Humus: art, body and Earth in the Anthropocene” (UERJ, Rio de Janeiro, Brazil, 2016).