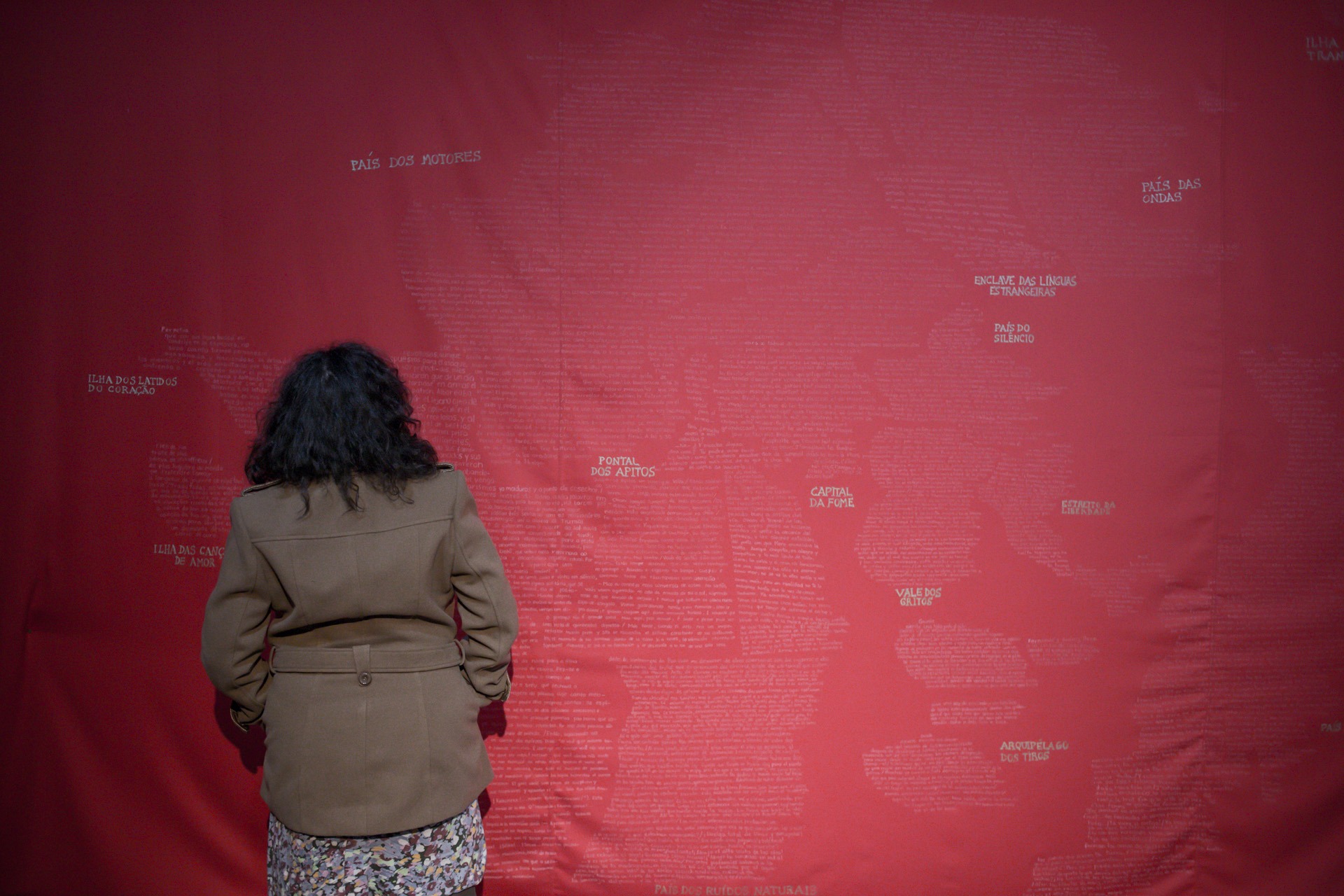 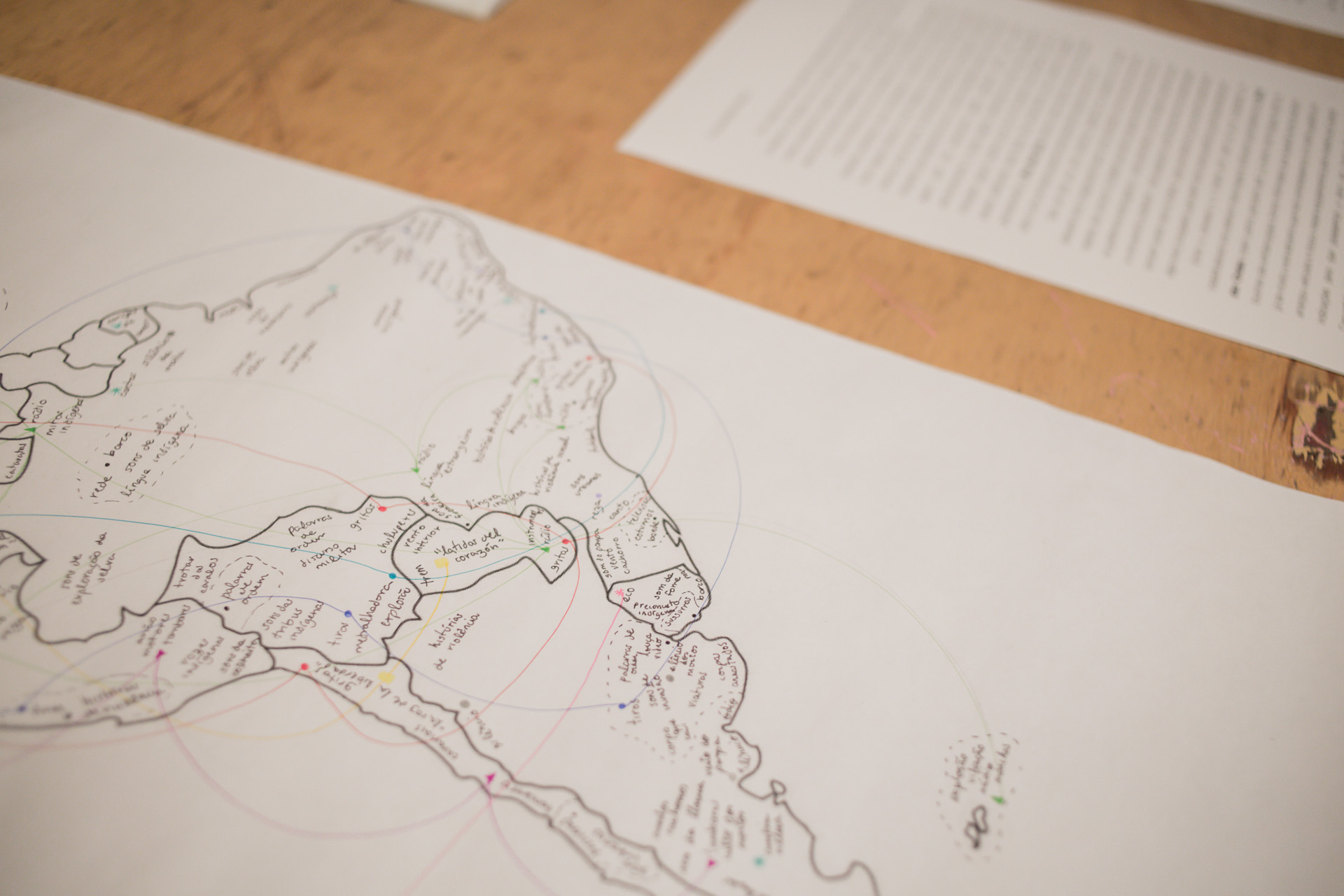 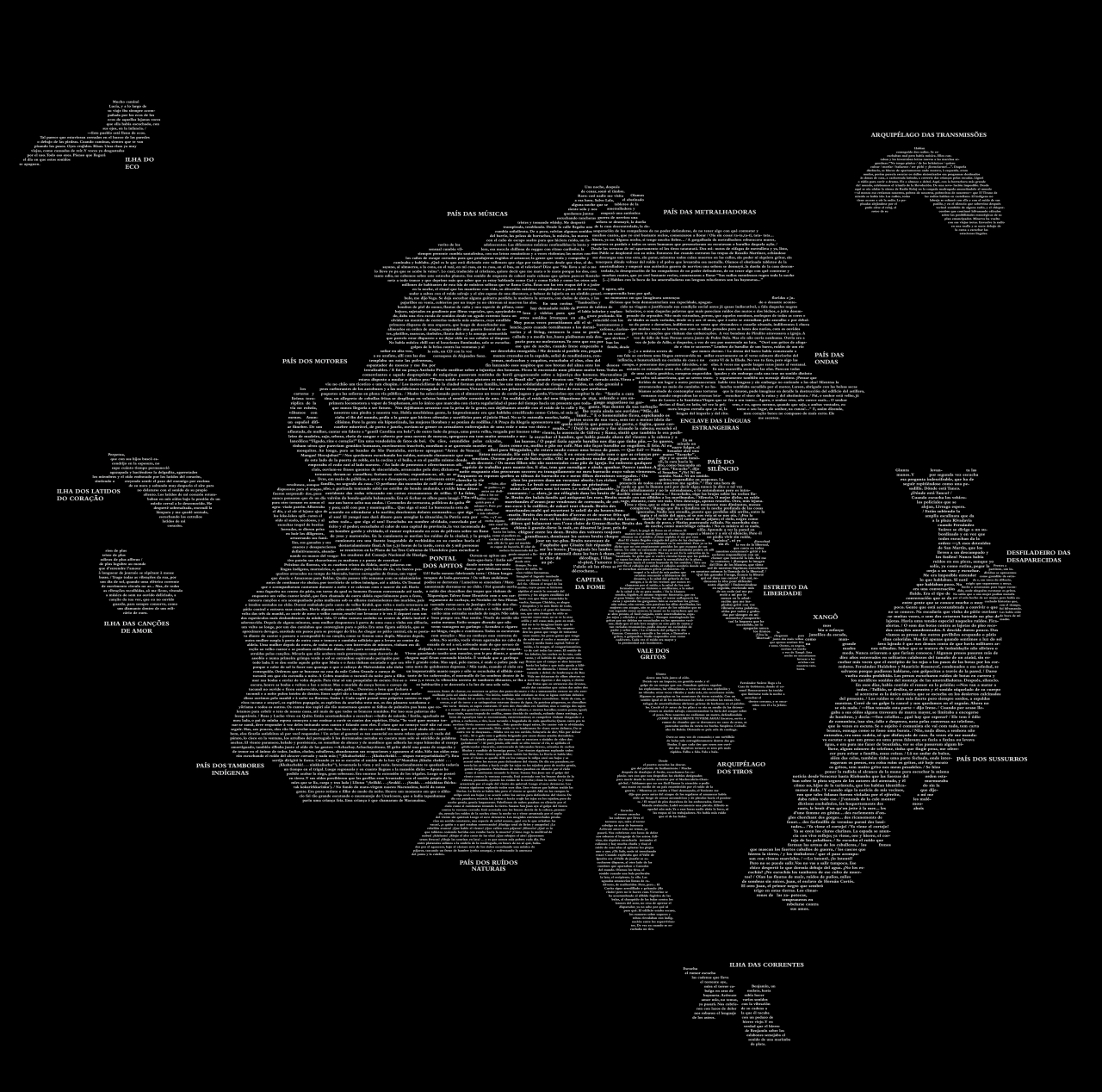 The installation “Listening Zones: Latin America” starts from the premise of the redistribution of Latin American countries based on their literary implications, or rather “what you hear” in each region of the new continent. The work consists of a large, 2.9m by 4.2m wide fabric map, a letter and some procedural files. The map was created with phrases taken from literature books, which provided the reconfiguration of borders and territory through the sound of each literary fragment: another landscape of Latinity, without considering middle, outside or margin. Another continent, another Latin America. Therefore, the project proposes that this new map is organized by sound regions, which are given by the incidence, repetition or proximity of the themes “heard” in the books. “One could hear the murmur of the wave alone.” (Macunaíma, Mário de Andrade, p. 53) / “In the long silence there was only a rustle of wings.” (Vidas Secas, Graciliano Ramos, p. 60). It is a cartography of overlaps, ears and sonar, lands and cultures, blurred borders.

This project was carried out during the Vila Flores Artistic Residency (2019), with funding from the Rio Grande do Sul State Culture Fund. The project went through three moments: a first curatorial cut, where the theme of “precariety” was decided, for then the choice of authors and books. The theme was chosen together with the researcher Luís Felipe Abreu, who participated in this process. A list of 90 fiction and novel titles was selected for each country and its present territorial occupation (the number of books in relation with the size of the country). The second moment was the selection of listening passages: the search for listening verbs or adjectives (listening, the sound was …), and then the formal configuration of the new map, made in the third stage of the project.

Thus, the installation proposes a collaborative reflection on agreements, territories, borders, and especially on relations between Latin American countries and their sonar. Literature was chosen as support because it is this abstract place of cultural and historical expression. The creation of a new map for Latin America not only demonstrates to the public the weaknesses of these legitimized linear instances of power, but also the power that these weaknesses take when they encounter deviation in the sound of northern Argentina but also in the south of Mexico, a powerful strangeness, to question contemporary regimes and political choices that are made by tracing a territory that is unrelated to the historical and resonance of neighboring communities.

The relation with the call is inherent to the work: it proposes a new way to create cartographies, or ever possibilities to review the ones we have.