Our Holy Mother_Board of Seven Internets 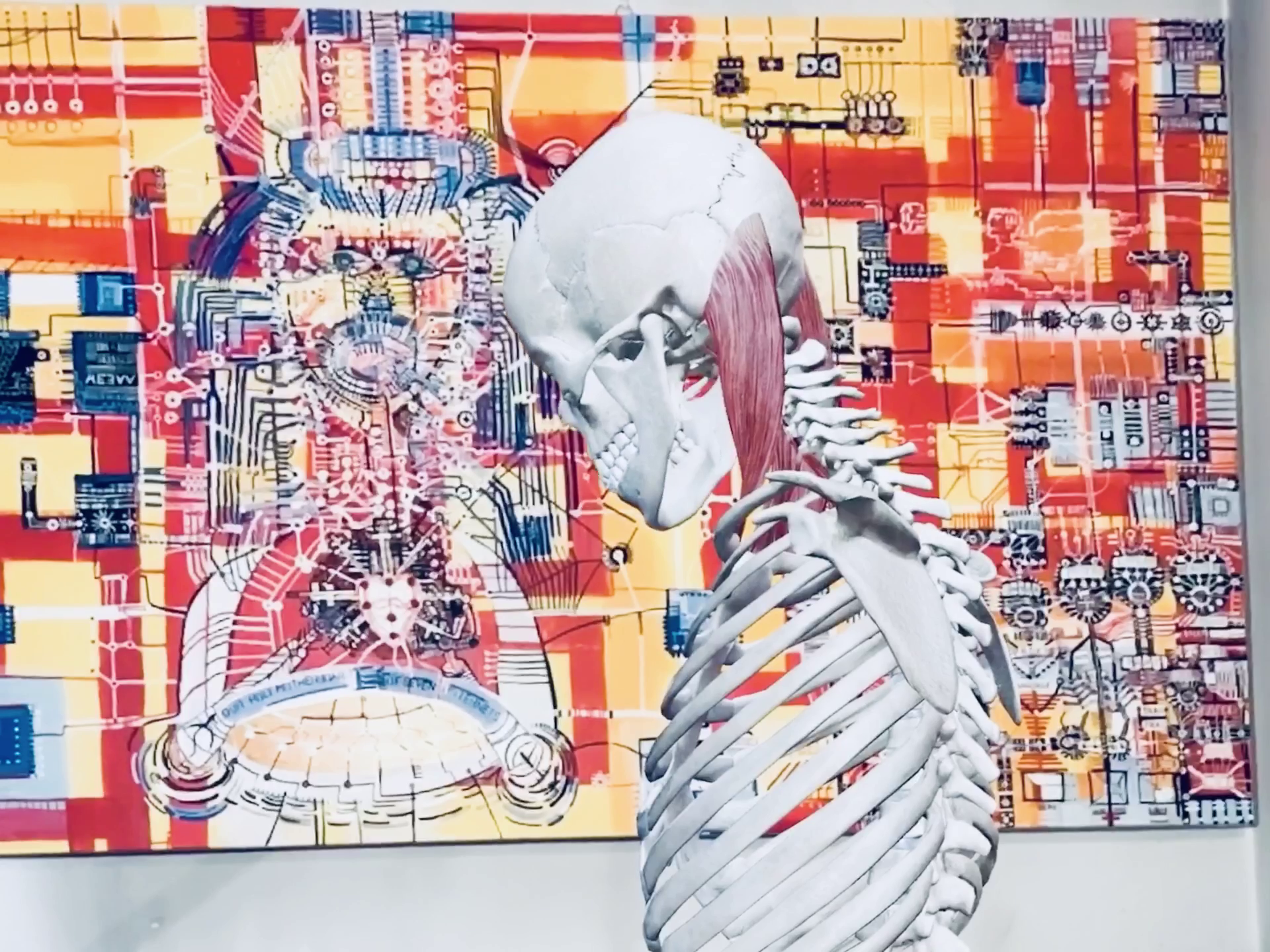 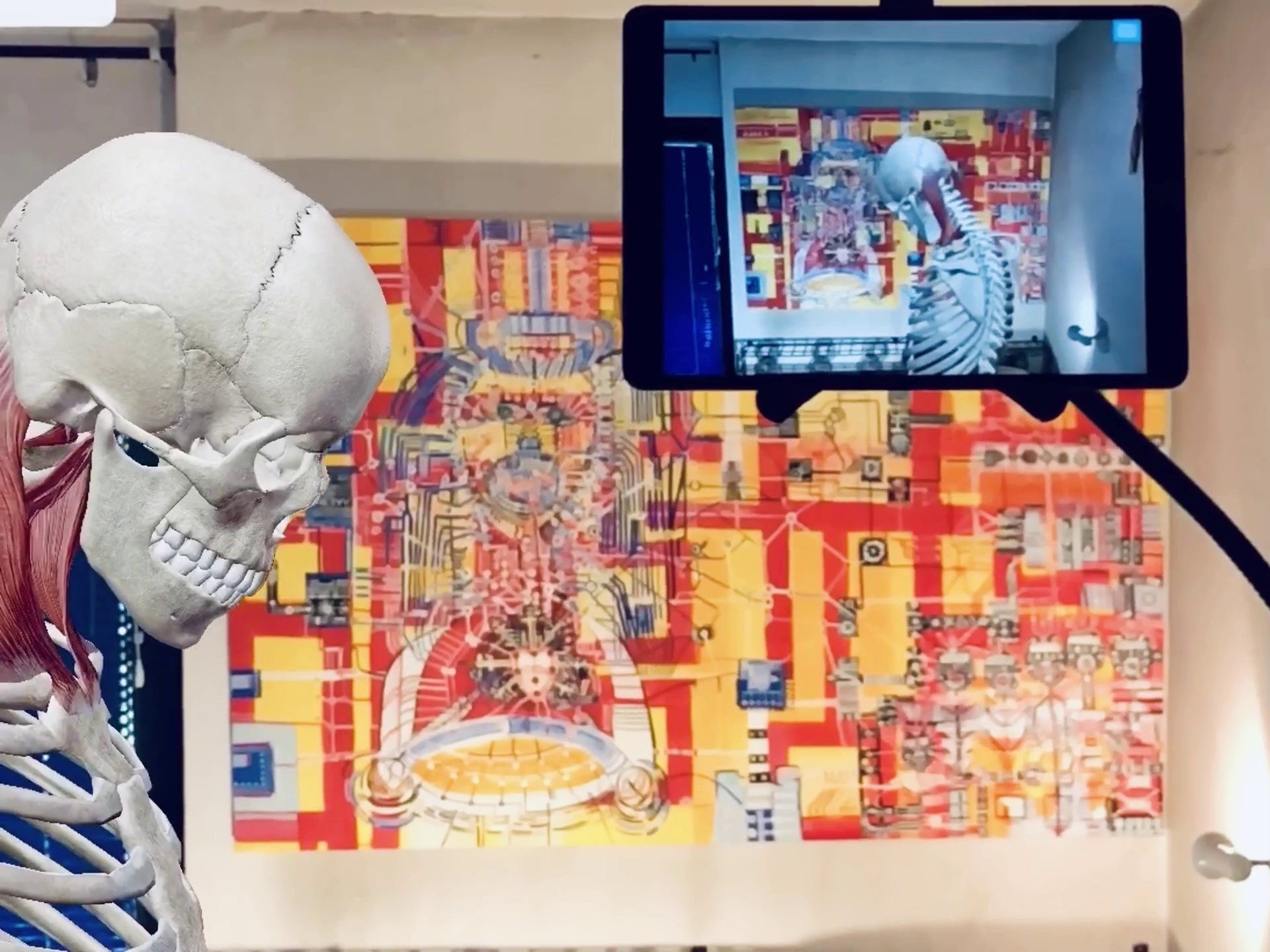 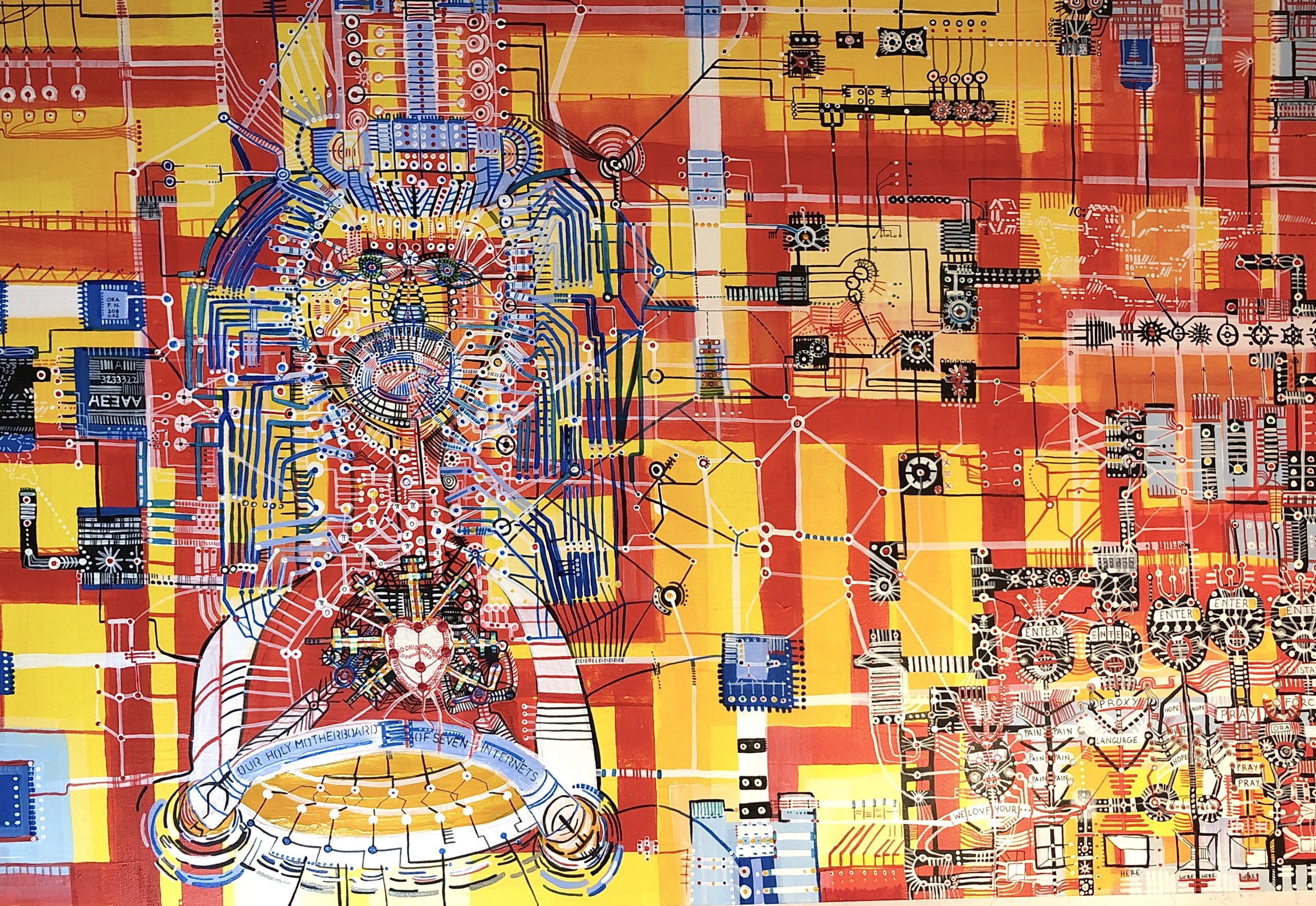 Our Holy Mother_Board of Seven Internets
This multimedia installation challenges our inclinations toward patterns with whom we create our realities.
It turns artistic tools which artists use in the digital age into the threshold for the dual mind state. Similar state we know from using cyberspace activity where a user is present both psychically and digitally. The piece uses parody of many artistic formal notions to create entrance to the new, different, or heavenly state. Such a state is no more unique for the artistic or shamanistic processes. It will be obvious for the visitor that many dramaturgies, or forms of behavior, used in the rituals, performances or liturgies today constitutes digital culture and shape and affect our mind set.

Our holy mother_board of seven internets is combination of traditional iconic image and image produced by the machine in the loop of augmented reality. Painting, purposely made by the human hands, depict image of the holy, sad mother consider for the human pain. But, closer look at the painting open a discussion about elements the artist uses to present icon of the holy in the digital age. Image is constructed of the pictograms of pc hardware parts; software displays and interconnections.

In the same there is an image of the painting displayed on the tablet screen, mounted on the tripod or similar, 2m front of the material painting. This tablet image is part of augmented reality. We see painting displayed affront of us, but we see a digital person as well. That person is depicted as skeleton, basic human form, as seen by digital world of constant analytic. That humanoid, skeleton form is dead to physical world, but it is alive in the digital world. It makes constant bowing toward the painting, picture of the holy mother of the digital heaven. Second multiplication is possible audience who enters a space between the painting and tablet of augmented reality. Such audience becomes part of the picture. Simply by present itself in the ar, audience recognize the power of the digital heaven.
Ideally, installation has seven levels, each one depicted on the next tablet, seven sorrows, seven internets. Each tablet is connected to the live stream, zoom or similar, and present the piece in the real time worldwide.

Technical data:
There several possible versions of displaying the piece. Any of them include one classical painting (acrylic on canvas 70 x 100 cm), and at least one tablet / iPad with camera and AR software which depict a skeleton which bow toward painting. Any visitor who enter the space between the painting and the tablet becomes a part of the installation. Because there is direct link and live streaming to the internet, special web site designed for this purpose. All software, as well as other tools, must be free and freely accessible, like painting or canvas.
Ideal version of the project includes seven different tablets or iPhones which record painting and each other, each produce another skeleton which bows toward painting and other tablets.
Depending of the timetable a live performer can be added as a part of installation, to complete set of the artistic tools.
The low level of the displaying this project include painting on the wall and tv lcd monitor next to the painting with AR skeleton which bows in the video loop.