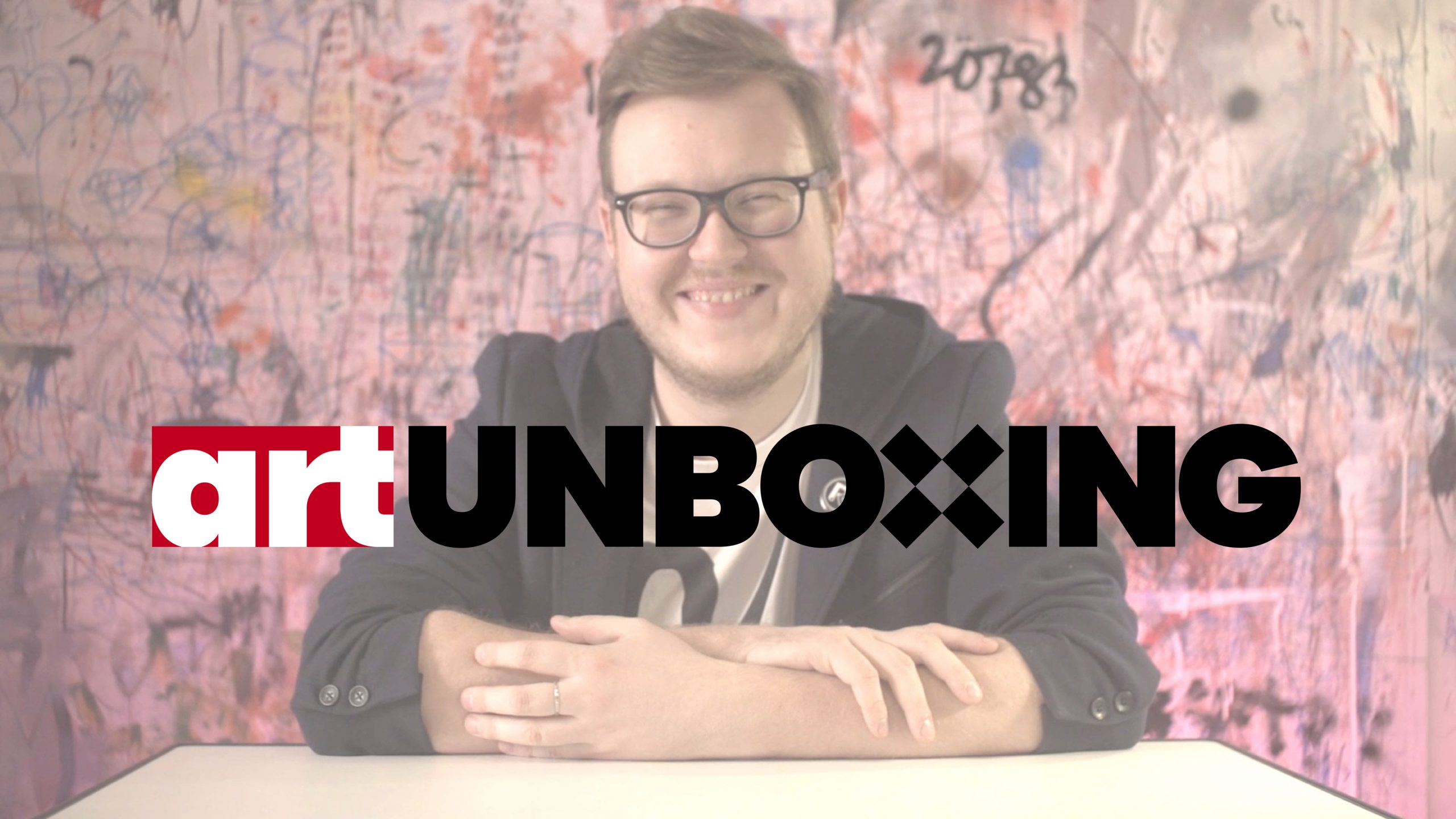 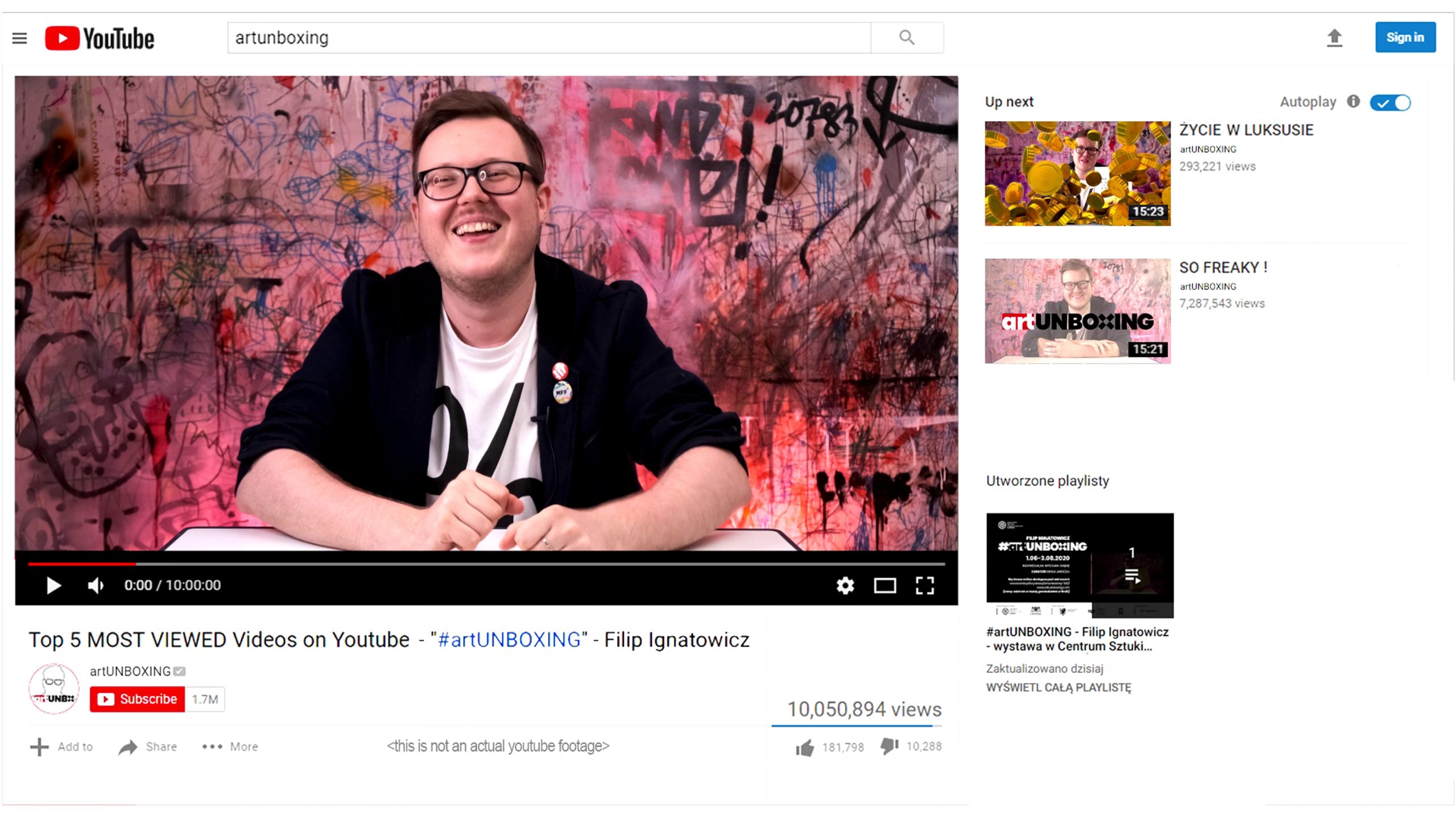 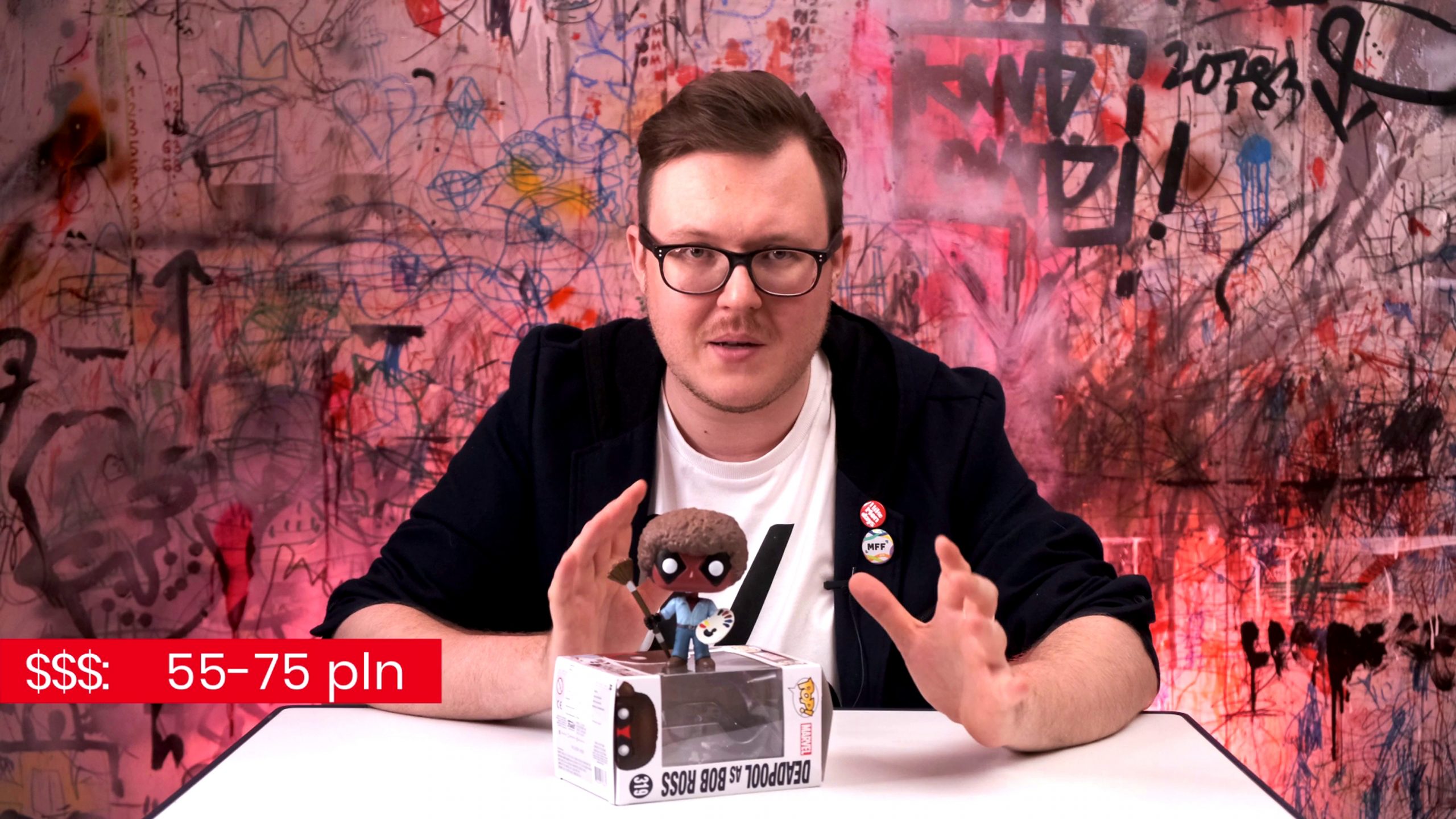 „artUNBOXING” (Filip Ignatowicz, 2014-2020, video performance – YouTube art project).
ArtUNBOXING is a video performance created specifically for YouTube, inspired by the online video genre of “unboxing”. The premise of these videos is the unpacking of products – usually popular and expensive ones – and then reviewing their appearance and functioning. Instead of objects typical for the genre, I open the artworks that I’ve purchased, objects signed by artists, or exhibition gadgets. At the same time, I commit a performative takeover. The gesture of unwrapping the package and testing the purchased object represents the essence of the performative act. This action forms part of my long-term project of exploring the boundaries between art and product, consumption, and culture. The artUNBOXING concept was coined in 2014 and presented in 2018 as a part of my Ph.D. thesis at the Faculty of Painting, Academy of Fine Arts in Gdańsk. Recently it was uploaded publicly on YouTube as part of my solo exhibition at the Centre for Contemporary Arts ŁAŹNIA in Gdańsk.

Relation to Open Call:
I think that the role of art changes, at the same time the way people interact with art also changes. Nowadays (from my personal experience) we mostly interact with art online, for instance seeing the documentation of art pieces on Instagram and doing the never-ending scroll. It’s addictive and often very satisfying but there’s something artificial to it. Doing my video performance series I give a more human way of experiencing art online- I believe that the viewers can somehow relate to my emotional reactions and expressions, they can immerse.
My project can be considered also a sort of solution to COVID-19 restrictions such as closing museums, closing concert-halls, and so on. Even if those places are reopening there is still a risk to become infected while attending exhibitions and thus it’s more difficult than ever to participate in the culture. My piece gives all the people (internet users) a chance to be a part of an art project- video performance series that was specially prepared for and dedicated to the internet space.
But my YouTube channel can be also considered as my personal virtual heaven- my face, voice, expressions, thoughts will probably stay there as long as YouTube and the internet will last. That is probably longer than my life expectancy- that’s another way how my project relates to the open call subject.
There’s also the aspect of this quasi-religious context of influencers. The Internet is full of them and they’re becoming the new icons, new saints. People are trying to mimic their behavior, their style. I am not an influencer, but during my performance, I am trying to act as one with my digital presence.
Art is often considered a mystery, the only thing that still has some secrets to it. So art and culture have its sacral features- but my project takes the art out of the altar and equalize it with a product. So art becomes commodified, but I do not consider it blasphemous, I think that it is a democratic idea. Never before in the history of mankind art was so common, now almost everyone can afford it. And if they can’t they can still watch me unboxing it. So there’s also this layer of substitution. Like in the authentic unboxing videos It’s really funny how enormous phenomena the unboxing videos are. There are high chances that if we summed up all the views of iPhone unboxing videos the result would be bigger than the number of iPhones ever produced. So in that way, the unboxing videos became the collective dream (and paradise) of the consumers‘ society.
My project has educational aspects but it still has got some absurd to it and sometimes is even comical. There are some moments when I’m quoting internet memes. I am using the visual language of an authentic internet genre that was generated by YouTube users. Using it to describe and create art can be considered a new narration in visual culture.