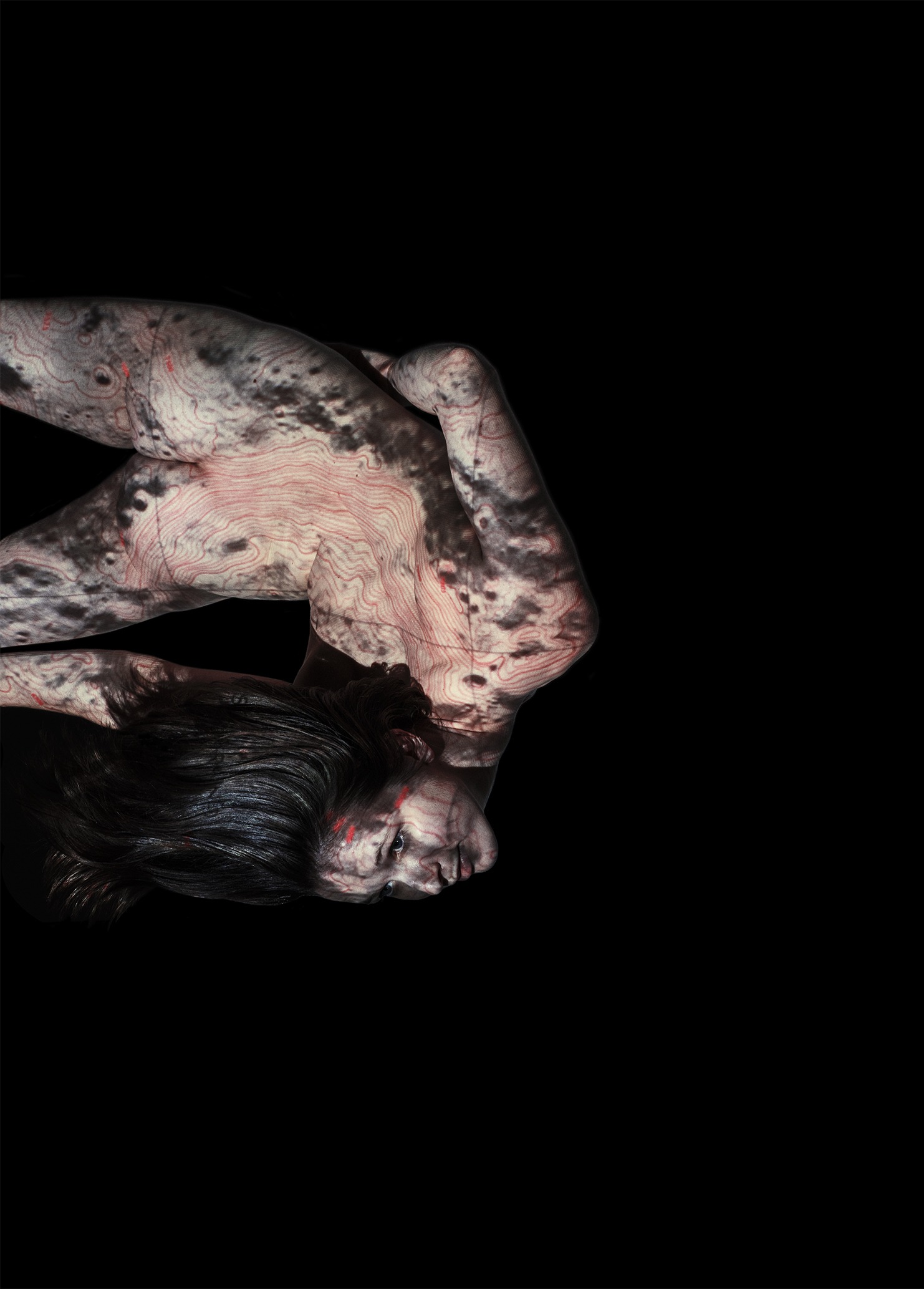 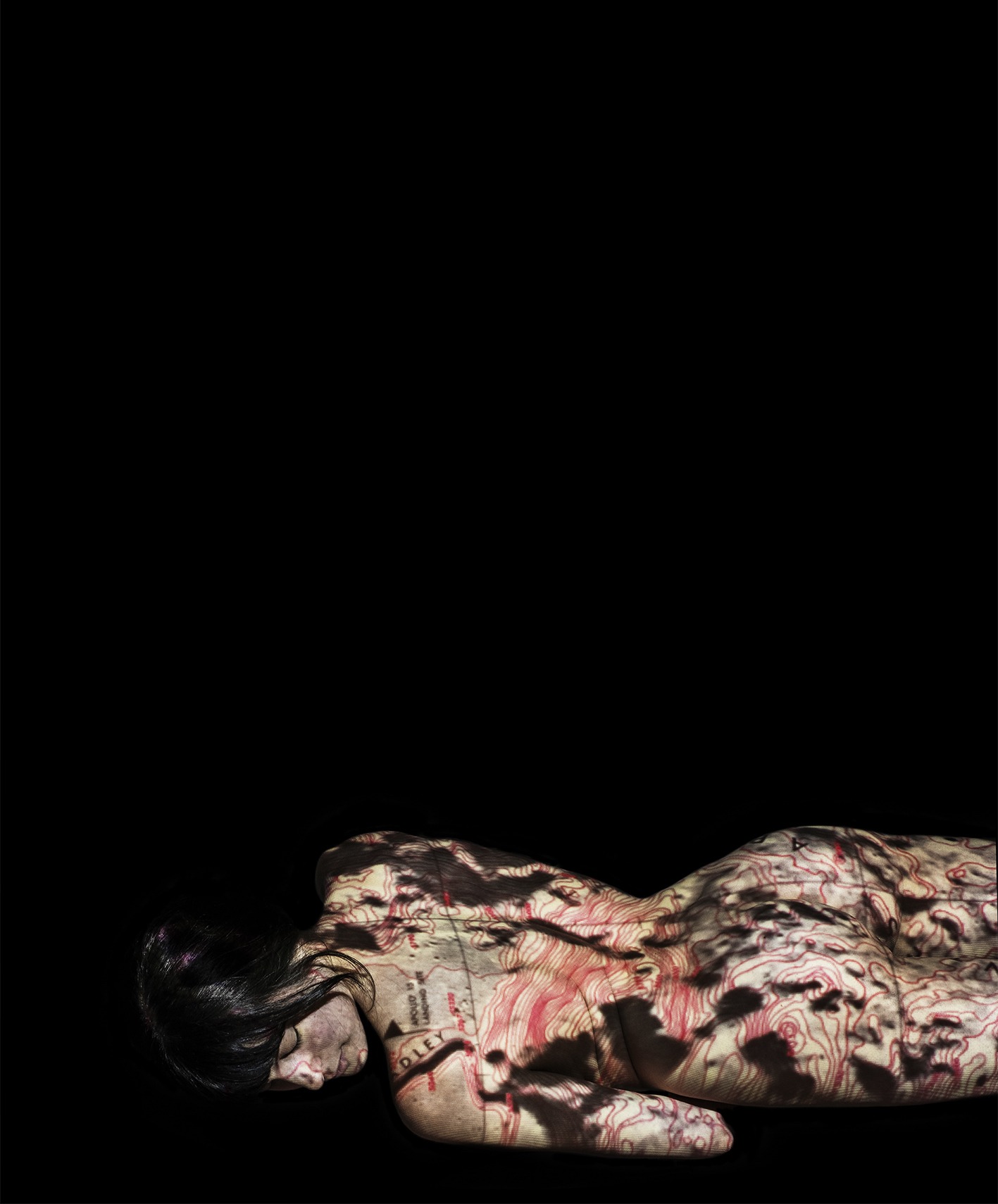 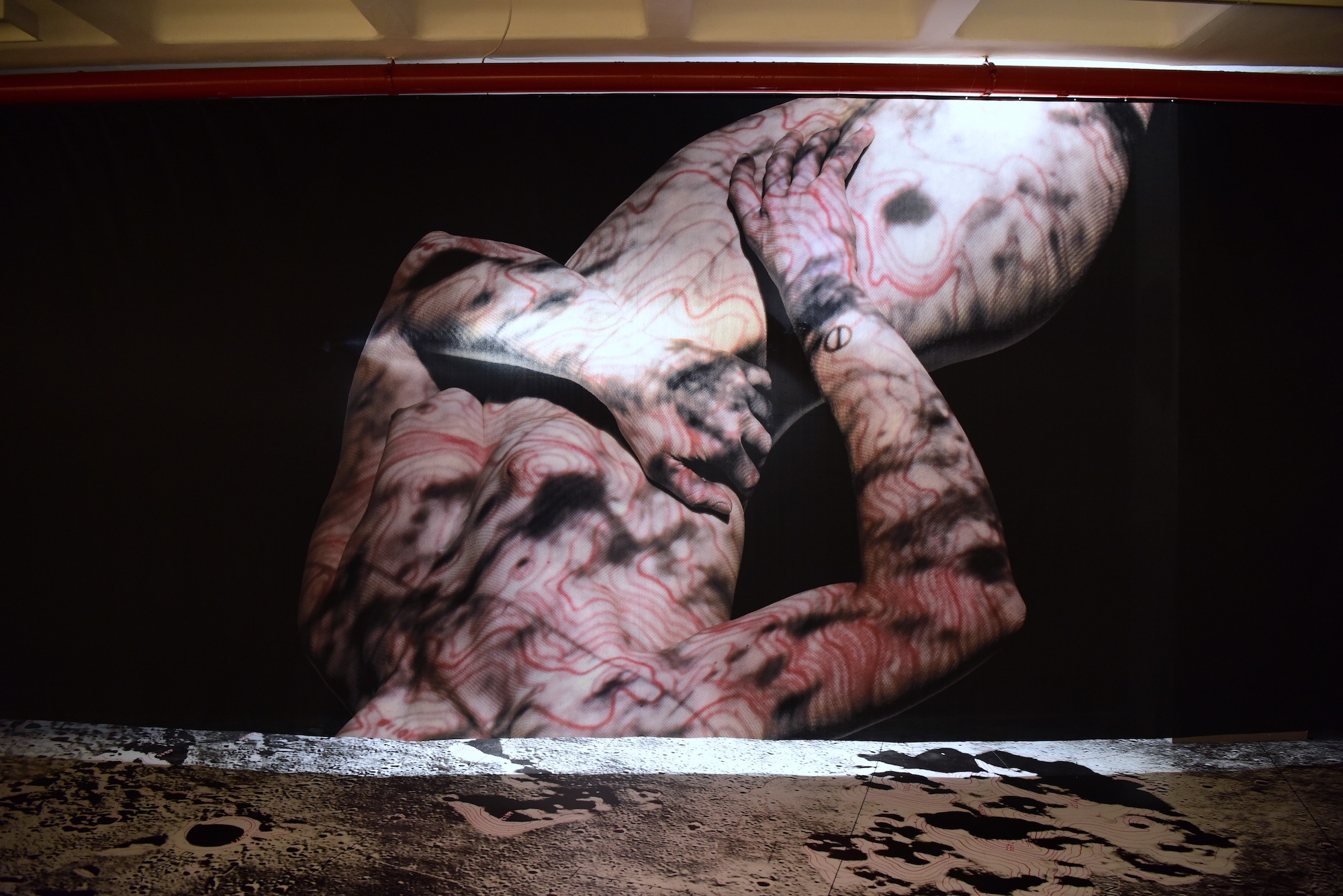 The Moon determines the passage of time in Islam, whereas charts that survey it and attempts of conquering it, have historically been products of Western thinking.
The Moon is also a feminine symbol, representing the rhythm of time as it embodies the cycle. When considering both the Western and the Eastern modes of thought, the Moon as a territory of conquest and the moon as the female body, the act of mapping the Lunar surface, sending rockets, missions, people to occupy the Moon, all can be viewed as acts of violence, of aggression.
In LUNAR, artist Sarp Kerem Yavuz builds upon the light-projection technique he first began employing with his Iznik tile inspired Masallah series. Using NASA survey images of the Moon from 1960s, originally created for the Apollo missions, which include markings and notations upon the lunar surface, the artist explores the female body as a canvas and a site of science fiction.
The models whose skin reflect the Lunar surface are all professional acrobats, their choreographies echoing zero-gravity environments, while also serving as a love letter to James Bond film opening credits.
The series was inspired by the NASA astronaut Peggy Whitson, a woman who wolds the record for most days spent in space. She broke this record around the same time the Turkish government passed a law making it legal for families to not send their children to school after the age of 13. This law disproportionately targeted young women, who would be the first to be expected/forced to stay home unless a high school education became mandatory.
LUNAR was a critique of the difference between what cultures imagine, permit, and enable their daughters to accomplish, and was presented at the Elgiz Museum in Istanbul as part of the collateral programming of the 15th Istanbul Biennial in 2017.

The works of Sarp Kerem Yavuz reclaim Orientalist imagery and bring the visual legacy of the Middle East into the present. Through photography, light projection, neon sculpture and digital drawing, he creates visually provocative works of art in pursuit of peaceful coexistence.
Born in Paris in 1991 and raised in Istanbul, his works explore gender, politics, religion, and violence.
He is the recipient of several international accolades, including the 2019 Leslie Lohman Museum Artist Fellowship, the 2016 Palm Springs Photo Festival Emerging Photographer award, presented by Leica Camera, the 2013 New Artists Society Award from the School of the Art Institute of Chicago and the 2013 Leah Freed Memorial Prize.
In 2013, he became the youngest artist to exhibit and be included in the permanent collection of the Istanbul Modern Museum.
His artworks are published in Turkey: Istanbul CODEX, and the Boys! book benefitting the Elton John AIDS Foundation.
His photographs are included in The Luciano Benetton Collection as part of Imago Mundi, the JPMorgan Chase Collection, and the permanent collections of the CICA Museum in South Korea, the Norton Museum in Florida, the Allen Memorial Art Museum and the Transformer Station in Ohio, the Polaroid (Impossible Project) Collection in Berlin, the Soho House Collection in Istanbul and New York, and The Marmara Hotel Collection in New York.
He has participated in over 30 exhibitions in Copenhagen, Amsterdam, Venice, Sydney, Amman, London, Shanghai, Dubai, New York, Chicago and Istanbul.
He currently lives and works between New York and Istanbul.