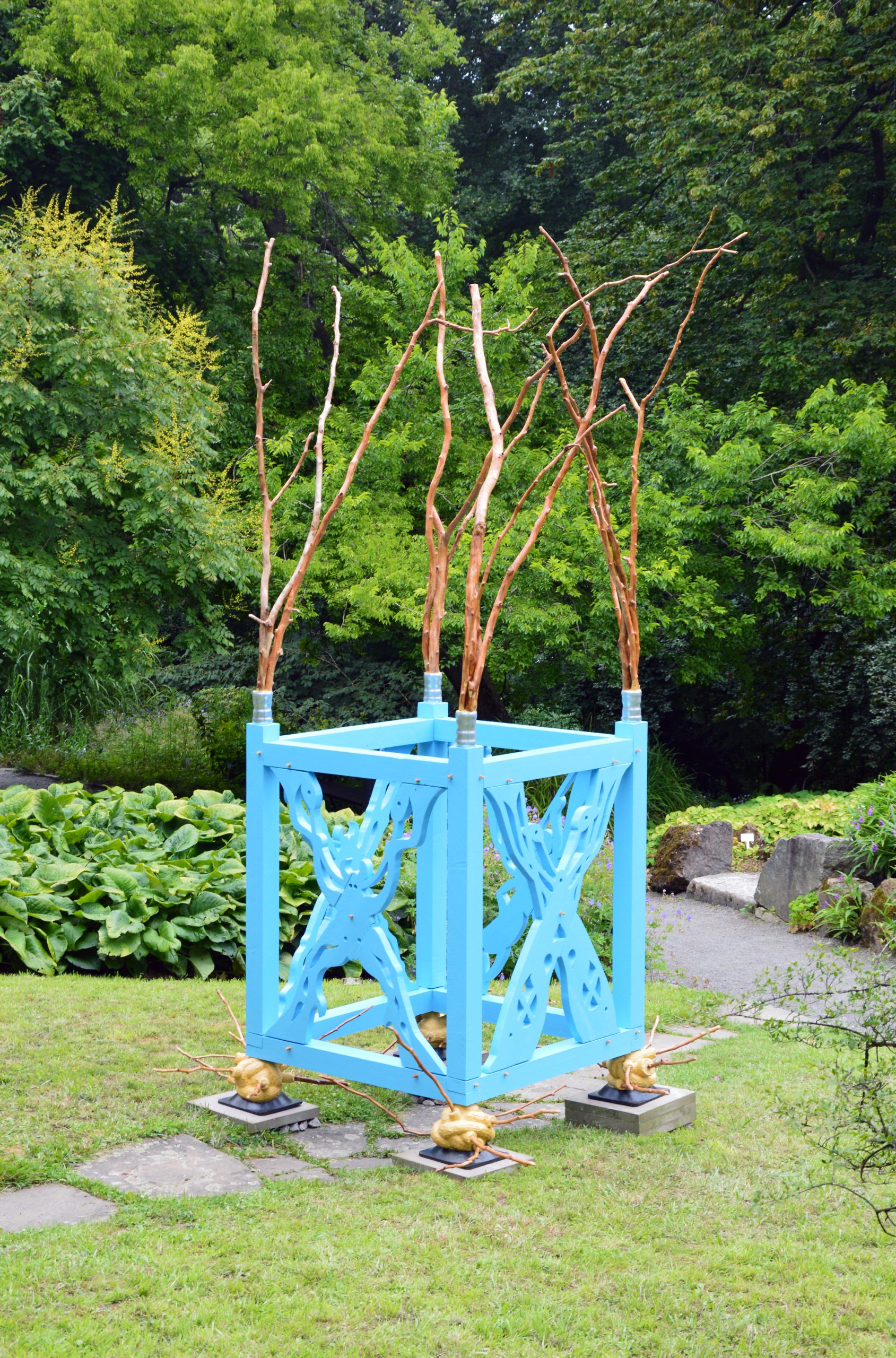 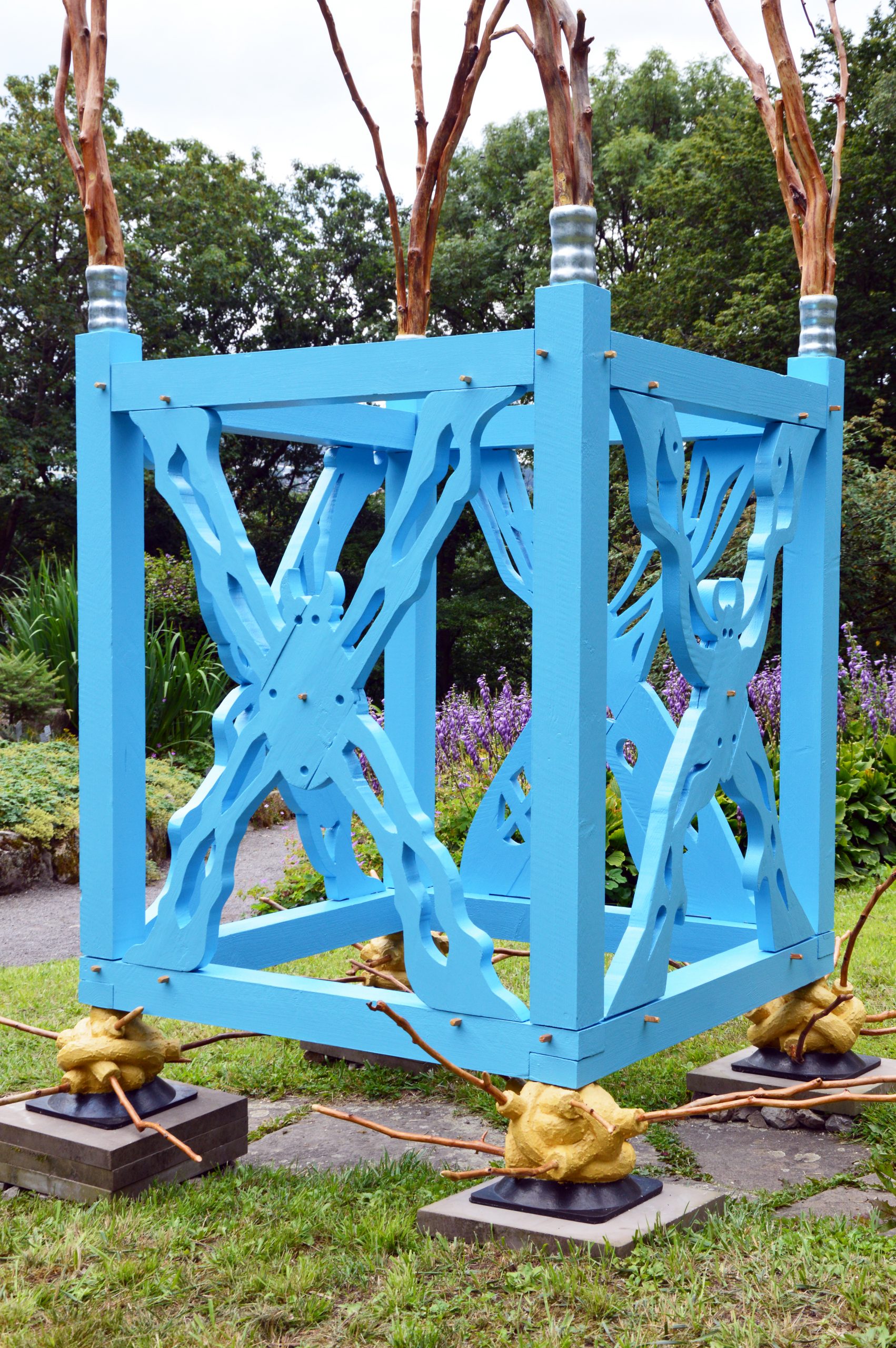 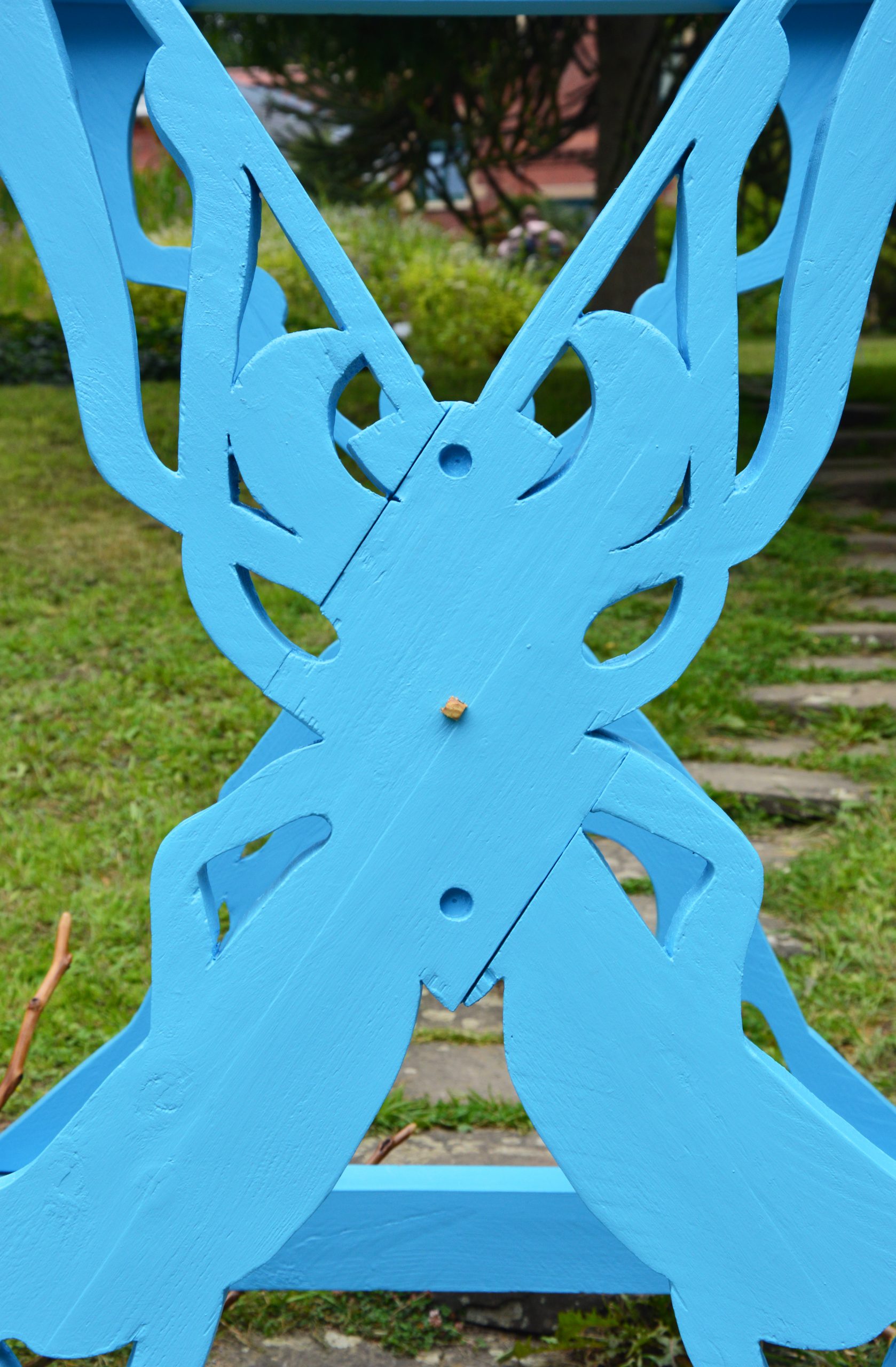 On a square ground plan of 122 x 122 cm there is a sky-blue cube with four gleaming golden-brown branch crowns shooting upwards from silver shining cuffs. It rests on 4 knotted bundles from whose tubular ends gently gnarled branches sprout. The cube is closed in all four directions by four different insect representations over a meter high.

From bottom to top, to the insects
The four "feet" I call Bündelchen (bundles). Actually, they're Chamaechories. These are representatives of a mobile plant family that can move through wind and weather. I use them as the foundation of the sculpture, so it is symbolically not bound to a certain place.
The Bündelchen (bundles) support the four corner stands of the central cube. This is constructed as a half-timbered structure. Since the uprights, i.e. the vertical beams in this construction method, are also called Stiele (stalks) in german, I derived the title of the sculpture STIELE (STALKS) from this. The term is older than that of the beam and even closer to the plant tree, from which finally the beam, which in form and concept hardly reveals its origin, is cut out.
At the end of the stems, further branches branch out from metal sleeves. Like those on the Bündelchen (bundles), they come from sycamore trees, which have had to repel them en masse due to the drought of recent years. I collected them and rounded off their ends, branches and knotholes, so that they became even smoother. They now appear in their form like corals and go back to the cup of the nymph Daphne from the Green Vault in Dresden. According to the story of the ancient poet Ovid, Daphne is transformed into a laurel tree to evade the advances of the god Apollo. Three coral tines were used for this goblet, which are also incorporated in cuffs on the figure's wrists. Corals also have the property of fossilizing immediately when removed from the water. A very beautiful metamorphosis picture, which also corresponds to the situation of nature exposed to climate change and in my case the situation of the plane trees, whose branches I could probably only find because of the current drought. It puts the trees under stress, which leads to the rejection of the branches.

The four fields of the cube are filled with wooden crosses, as can often be observed in half-timbered buildings. Sometimes they are ornamentally curved on historical specimens and are intended to keep away fire, ghosts or other misfortune. Based on this, I have cut four insects, schematized out of the crosses. A spider, a grasshopper, an ant and a moth. These are not exactly the most popular representatives of the genus and also charged with various meanings, legends and myths. For example, the moth is one of the most important vanitas symbols, the ant is a swarm intelligence, the grasshopper is an almost apocalyptic omnivore, and the spider is a nightmare firmly anchored in human collective memory. Each of these animals is present in literature, film and history. Whether as a cover picture in The Silence of the Lambs (Moth), as a science fiction army in Phase IV (Ant), as a biblical plague (Locust), or as Aragog, in Harry Potter and the Chamber of Secrets, feared and finally mourned (Spider).

Considerations
The entire sculpture is built over a path in the picture and blocks it. At the same time, the two insects facing the path, grasshopper and ant, could also have a guardian function. In the end I had the feeling to have created an artificial ruin. Architecture as real estate proliferates up and down, Bündelchen (bundles) of Chamechories, which are moveable objects, imagine movement into the sculpture, which thereby becomes animated itself. Furthermore, it is populated by animals/insects. All these are signs of decay in the architecture and symbol of the ephemeral and the eternal human struggle against it, to which, if it wins it, it falls victim at the same moment. For then he would have defeated nature of which he himself is a part.